A new episode of Decipher the Media is now live on iTunes, Google Play, Stitcher, and YouTube!

Body Farm will be screened TONIGHT, June 22nd at 8pm at the Father Ryan Arts Center as part of the Pittsburgh Independent Film Festival. 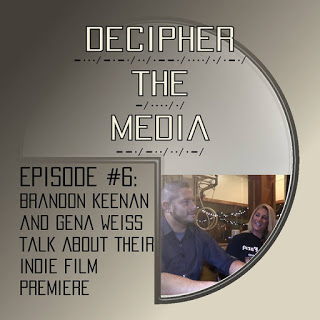 Back before the premiere of our indie film Body Farm in January, I had the chance to sit down with Brandon Keenan (Actor, Co-Producer, Co-Director) and Gena Weiss (Actor) about their roles on the production of Body Farm. We touched on what it took to get into their roles in front of the camera. We also discussed a lot of what went on behind the camera and the kind of fun we had while producing the film. And, as this is a horror film, we touched on the gory effects that made this production come to life. From beginning to end, here are the many things that go into producing an independent horror feature film!